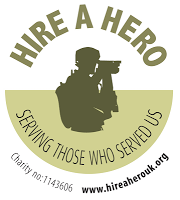 The concept of Hire a Hero has been around for some time, however it lacked clear direction and support in order to take the original idea forward and turn it into the charity it is today.

With the involvement of Gerry Hill and a few like-minded individuals, charity status was sought and granted for Hire a Hero and the journey began.

The knowledge and experience Gerry had gained during his 45 years of military service, particularly in the latter years, enabled him to recognise the value of appropriate welfare support for the men and women of our Armed Forces and the problems they encounter on leaving the services.

The original idea saw Hire a Hero concentrating only on employment; however, it was clear that the problems faced by individuals leaving the forces were great and more numerous than had originally been anticipated.

They broadened the remit of Hire a Hero to cover training, housing and care plans as well as employment for past, present and future service leavers.An ever-increasing network of supporters who had an understand of these situations was put together to help run the charity.

Bristow Group is the leading provider of industrial aviation services offering helicopter transportation, search and rescue (SAR) and aircraft support services to government and civil organizations worldwide. With headquarters in Houston, Texas, Bristow has major operations in the North Sea, Nigeria, the U.S. Gulf of Mexico, and in most of the other major offshore oil and gas producing regions of the world, including Australia, Brazil, Canada, Russia and Trinidad. Bristow provides SAR services to the private sector worldwide, and to the public sector for all of the UK on behalf of the Maritime and Coastguard Agency.

Aletheia IMS is proud to continue its support for UK Aviation

Or you are welcome to use our contact form.

Get Social With Us